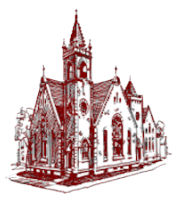 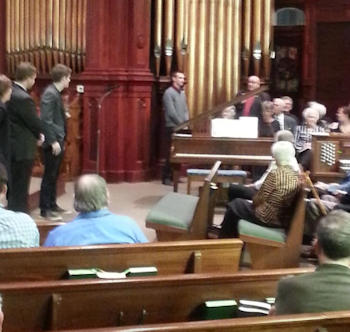 On October 27, 2019, the congregation and many neighbors and friends came together to enjoy a piano and organ recital in the sanctuary here at Zion Lutheran Church.

Nick Galanaitis, Jacob Ziegler and Ian Hoke performed many selections from Mozart, Chopin, Bach and others including original pieces by Nick Galinaitis.  The Zion Gethsemane Choir took part in the performance as well.  We were treated to a piano and organ duet, a four-handed piano duet, and we even took part in singing some familiar hymns. 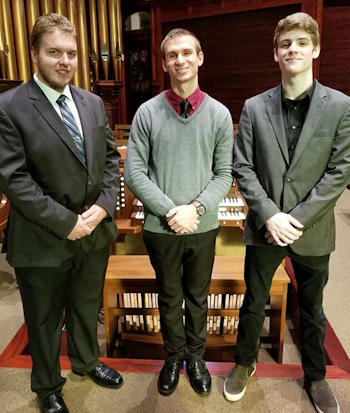 Nick Galinaitis is the Director of Music at Zion Lutheran Church and St. Jacob's Lutheran Church in Glen Rock PA.  He studies with Dr. David Kreider and has performed for venues including the L.A. Breakfast Club in Los Angeles, CA, and for the Arts for Hearts Sake Recital Series hosted by the Villa Assumpta in Baltimore, MD.

Jacob Ziegler is the Director of Music at St.Mark's Lutheran Church in Hampstead, MD.  He teaches organ at McDaniel College in Westminster, MD, and has studied with Ted Dix as well as Dr. Tim Murphy at Towson University where he obtained his Masters in Organ performance in 2019.

Ian Hoke is the Director of Music at Keysville Lutheran Church in Keysville, MD. He studies with Dr. David Kreider and has performed for many recitals at McDaniel College in Westminster, MD. He currently studies music at Carroll Community College.

More in this category:

SEARCHING FOR MUSIC DIRECTOR / ORGANIST
We are actively searching for a Music Director / Organist to develop and lead the Music Ministry here at Zion. If you believe that you or someone you know would be perfect for this position, then we want to hear from you.  Find the details HERE or speak to Pam Hoffman or any other member of the Music Search Committee (Joy Brown, Jeff Hoffman, Darryl Engler, Butch Hengst, Linda Beegle, Jim Hoffman).

NEW! COVID-19 GUIDELINES FOR WORSHIP HAVE CHANGED
The Council respectfully requests that anyone attending Sunday services do the following:

Communion will continue on the 1st and 3rd Sundays of the month, using the individual chalices while staying in the pew.
Hymns will no longer be printed in the bulletins; hymnals will be used
Sharing the Peace will continue to be done while staying in the pew
In-person Sunday (9AM) service will also be live-streamed on Facebook and recorded each week and posted to YouTube by Sunday afternoon.

SOCIAL TIME AT ZION TEMPORARILY SUSPENDED
Effective 8/15/2021, Social Time will be suspended given the new COVID-19 guidelines from the CDC. We as a council will continually monitor the situation and hopefully we will be able to remove these restrictions as soon as possible. Again, thank you for you patience, support and flexibility.

CHURCH OFFERING
Please continue to support Zion’s mission.  Your financial contribution can be made by:

CHURCH OFFICE HOURS
The office is now open to in person visits. It is best to contact Brenda before stopping in the office because she is still splitting her time working at home and in the office. Brenda can be reached at 717-235-3276 in the office, or on her cell phone at 717-793-7236.