On August 28, 2010, he delivered a brilliant presentation on the history of our church at Zion. The Glen Rock Historical Preservation Society and Zion jointly recorded the presentation, and you can view the entire video on YouTube anytime. It’s about an hour long, but worth the viewing if you have the time.

Dr. Glatfelter, who died in 2013, was Professor of History Emeritus of Gettysburg College. Among his many accomplishments, he was Dean of the College and the long-standing Director of the Adams County Historical Society. We are proud to say that he was a life-long friend of Zion.

Zion's History At a Glance

August 29, 1860: The first meeting of the Zion brethren was in Sheffer’s room, No. 7 of the Railroad building on with one dozen male members in attendance:

October 24, 1860: The first election of officers occurred on; and Messrs. E. K. Bollinger, J. G. Bortner, Philip Sheffer, Charles Gladfelter and John Foust (or Lentz) constituted the first church council. At the same meeting a committee of five men was appointed to secure a building lot for the church. The building committee however consisted of Philip Sheffer, O. R. Wentz and John Foust

Spring 1861: Subscriptions to building fund were solicited and received and plans adopted for the first 2-story brick building consisting of a basement and auditorium with a plain front, cupola and a bell. The site was to be at the corner of Hanover and Water Streets across from the schoolhouse. 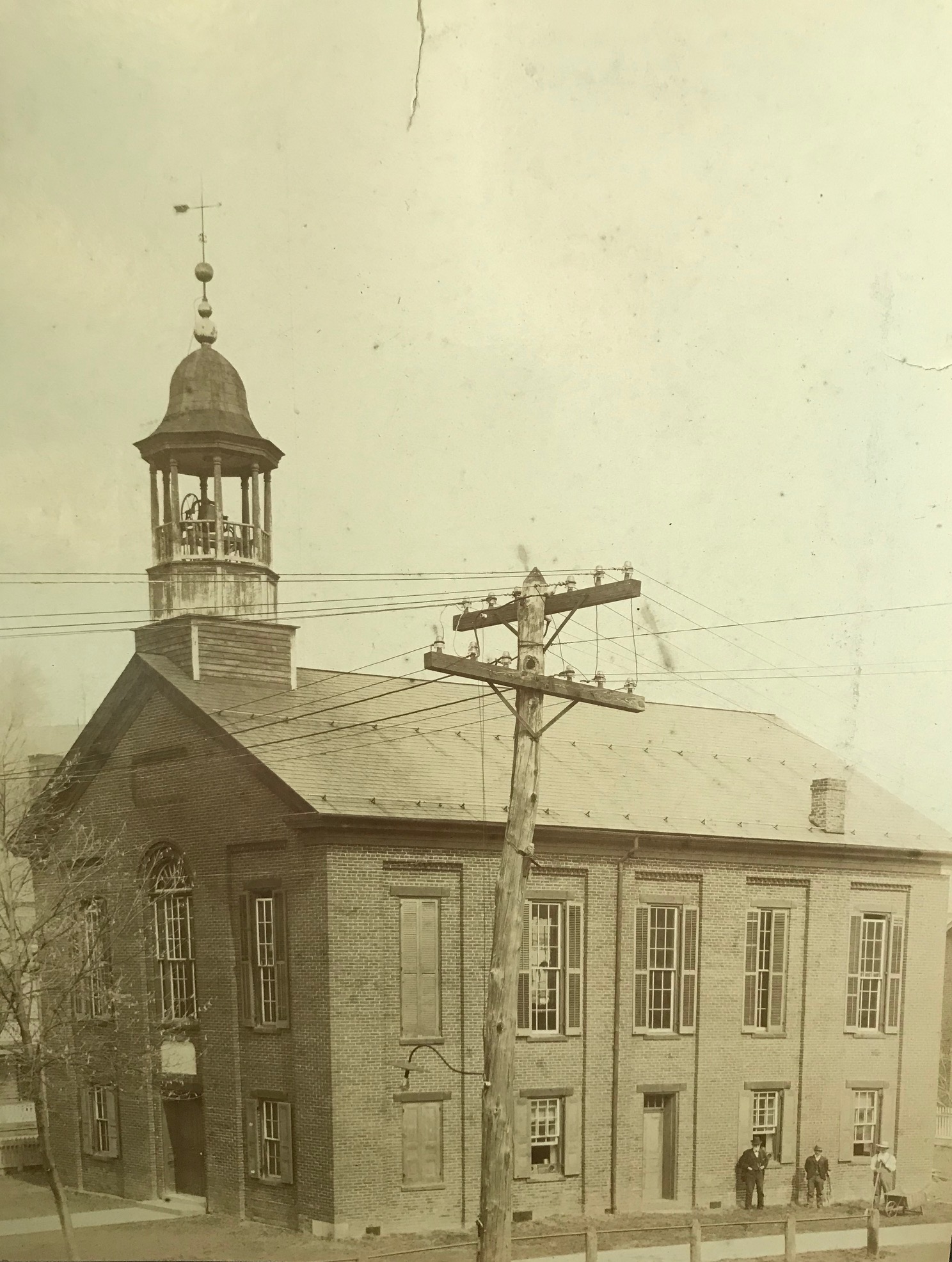 July 20, 1862: the cornerstone was laid with great ceremony.  The picture at left shows the original the original building in 1862.

March 30, 1863: Even before the arrival of the first Pastor, arrangements were being made for a cemetery in which the Lutherans could bury their dead. On this date, Samuel Rennol and wife conveyed two acres of land high on a hill but still within the borough limits: “For the use and purpose of a public burying grounds or grave yard.” The church wasn’t incorporated so could not own any land at this point. It was held by three trustees.

May 14, 1863: the church was dedicated (on Ascension Day). The cornerstone laying service was held in the latter part of 1862 or early in 1863. A small lot of land was obtained for building a parsonage as well.

June 13, 1863: The congregation decided to form a separate pastoral charge rather than stay a part of the Shrewsbury charge. The first enrollment of members occurred when forty-five members, mostly from Fissel’s and other churches, transferred to the new organization

September 1863: William Boeckel journeyed to Western PA to the sessions at Newville, Cumberland County to request that Zion be admitted to membership of the synod. Without objection the petition was granted.   Historically Lutheran churches were founded and remained completely independent of any religious authority. This action showed the church members were willing to give up some of the independence in order to be a part of the Lutheran Church of the United States in order to participate in broader benevolence programs.

October 1, 1863:  After the completion of the church elected Rev. Jacob Kaempfer as the first pastor. The preaching from the beginning seems to have been in both German and English (in 1868 new hymn books were secured, an equal number in each of these languages).

August 26, 1864: The congregation filed a petition with the PA Court of Common pleas and was granted the charter to become a nonprofit corporation thus entitling the church to buy, own and sell property of all kinds and to sue and be sued. Under this charter, the church was provided a basic set of rules under which they were expected to operate. The full and correct name of the corporation was: “The Evangelical Lutheran Congregation of the Zion’s Church in the Borough of Glen Rock, in York County, and State of Pennsylvania and vicinity.”

December 21, 1864: the trustees chosen to hold the land on which the church was built and those holding the cemetery conveyed these properties to now incorporated congregation. The first burial in the Chestnut Hill Cemetery was Jesse Merkel who died of typhoid fever.

Saint Paul’s (Hametown) came into being in 1874 and made overtures to Zion church to be united with it as a charge.  February 7, 1877 Rev. Mr. Koller relinquished the pastorate on, to accept another call.

July 20, 1877:  Rev. J. B. Wolf, a recent graduate of Gettysburg Seminary, was selected by a practically unanimous vote of the members present. Rev Wolf came to a church that was deep in debt as the building of the church cost approximately $4000.00. This debt was paid off within 4 years in large part due to several members buying large plots of land and selling them off in smaller lots for a profit that was then given to the church.

The original parsonage, after serving its purpose for some years, was sold to a private party and a new house was built on a lot adjoining the church for the pastor’s residence. At the time, it was considered a “first-class modern parsonage,” built of brick, costing about $6000 to build.

About 1895:  pastor Wolf’s health became very much impaired and a report from his physician was brought to the congregation by Mr. Joseph Dise that “The pastor’s sickness was due to the unhealthy location of the parsonage.” This resulted in the erection of a fine new house which later was purchased by Dr. Wolf and became his private residence.

February 19, 1905: at a congregational meeting, “Joseph Dise, architect, presented plans for a new church, which were adopted.” A building committee, consisting of S. K. Diehl, Joseph Dise, Paul Beck, Wm. Foust, George W. Geiple, W. W. Seitz and Henry Bollinger, was appointed and authorized to proceed with the erection of the building. The corner-stone of the new church was laid on July 7, 1905, 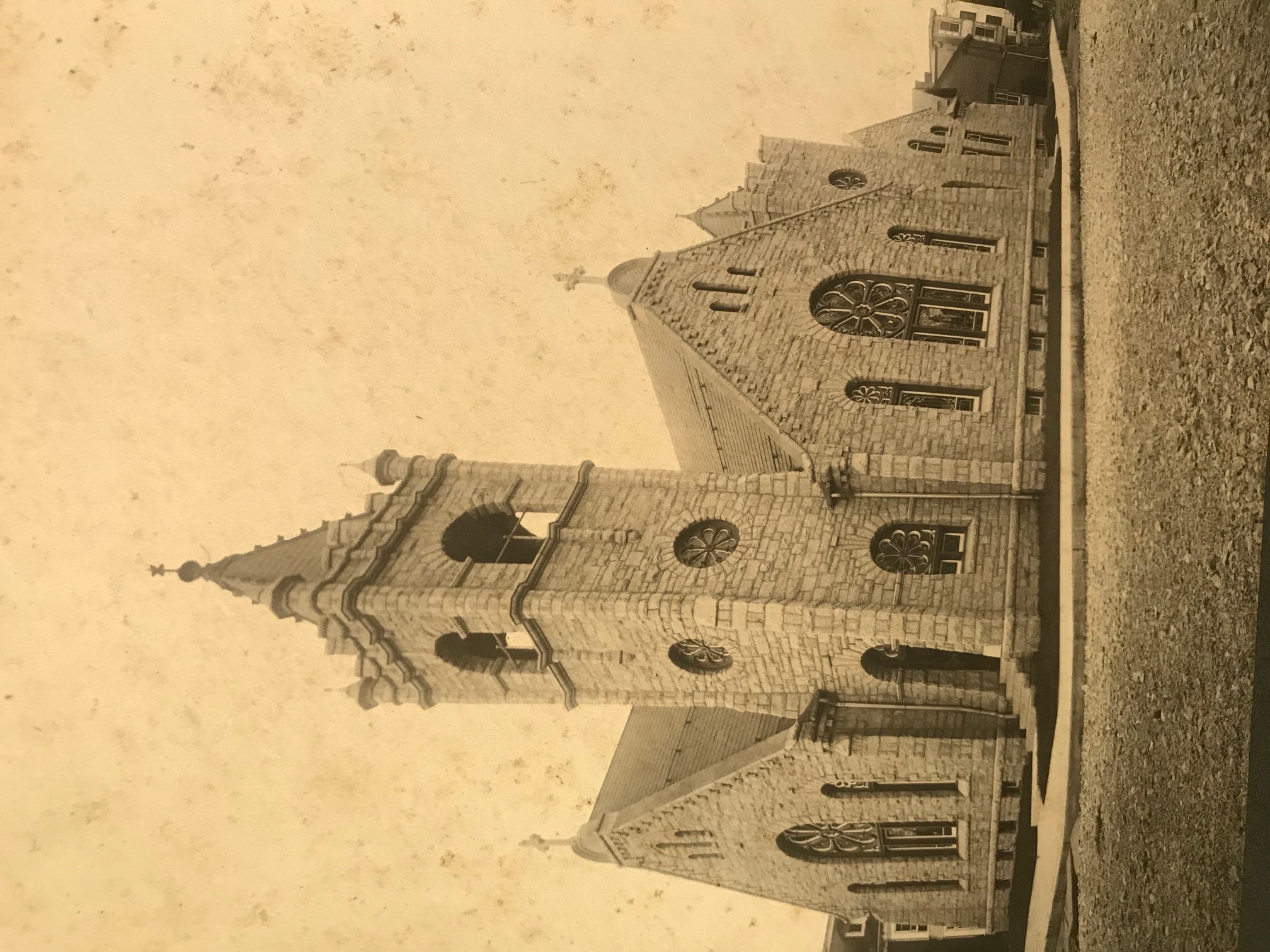 December 23, 1905: The first service was held in the church on; but the dedicatory service did not occur until May 12, 1907. The picture at right shows the current building dedicated in 1907.

The pastors of the other churches in Glen Rock and neighboring Lutheran pastors closed their churches and joined in the dedicatory service. “The church consisted of an auditorium, finished and furnished in a rich mahogany color and seating 400 people, a Sunday School room seating 300, which may be opened into the auditorium by folding doors, and a primary room for 100. It is lighted throughout with electricity and is graced by a sweet-toned Esty Pipe Organ, costing over $2000. Dr. Hartman says: “It is one of the most beautiful well-appointed and churchly houses of worship it has been our privilege to see.”  Exclusive of the architects’ fees, which were donated, much of the hauling and large donations of gratuitous labor, the cost of the building and furnishings was over $30,000, all of which was provided for on the day of dedication… credit is to be given to the architect, Mr. Joseph Dise, a member of the church, whose beautiful vision found expression in material form in this most worshipful house of God.”

February 21, 1923: it was decided to purchase the property adjoining the church, containing a double brick house and a barn, for $8000, the title for which was taken on April 2, 1923. Zion church now has enrollment of 434 communicant members, a Sunday school enrollment of 457

Excerpted from: Zion Lutheran Church, Glen Rock, York County, PA. Contributed for use in the USGenWeb Archives by Abby Bowman Copyright 2005. All rights reserved http://www.usgwarchives.net/copyright.htm http://www.usgwarchives.net/pa/york ; History of the Evangelical Lutheran Synod of West Pennsylvania of the United Lutheran Church in America, 1825-1925 – Edited by Adam Stump, D.D. and Henry Anstadt, D.D.; Published by the Action of the Synod in Celebration of Its Centennial, Printed For The Synod By J. R. Kerr & Bro., Chambersburg, Penna.,1925 Pg 468-47

SEARCHING FOR ORGANIST
We are actively searching for an Organist to participate in the Music Ministry here at Zion. If you believe that you or someone you know would be perfect for this position, then we want to hear from you.  Find the details HERE or speak to Pam Hoffman or any other member of the Music Ministry Search Committee (Joy Brown, Jeff Hoffman, Darryl Engler, Butch Hengst, Linda Beegle, Jim Hoffman).

Mark your calendars for our annual congregational picnic on July 24th. There will be NO CHURCH SERVICE AT ZION on that day.  Get all the details and sign up in the back of the Social Hall  to attend and/or to volunteer to help.  Questions?  Please see any member of the Christian Ed Committee (Lois Goodling, Jeff Hoffman, Pam Hoffman, Bill Ream, Gloria Ream, Bev Reindollar- Chair, Evelyn Roser, Pam Spangler).

BACK TO SCHOOL COLLECTIONS
Zion will be collecting school supplies and gas and store gift cards to pass on to Southern Community Services and/or to the SYCSD Social Services Coordinator. Because Southern Community Services and the school district are often resources for families struggling to make ends meet, we will be collecting gift cards as well as school supplies. School supplies can be placed on the stage in the Fellowship Area. Gift cards can be placed in the offering plate. Monetary donations will also be accepted. Please make checks payable to “Zion Lutheran Church” and indicate on the memo line “Back to School”.

CONGREGATIONAL MEETING CANCELLED
There will be NO Congregational meeting on Sunday, 7/31, immediately following worship. The shared Deacon Proposal has been postponed indefinitely.

OFFERING ENVELOPES FOR 2022
The offering envelopes have arrived and can be picked up from the windowsill in the back of the sanctuary.

FRIENDS & FAMILY DIRECTORY
Copies of the new Friends & Family Directory are available on the windowsill near the bulletins at the back of the sanctuary.

HEALING SHAWLS FROM COMPASSION & CARE TEAM
Glen Rock resident, Lucy Cadwallader, contacted Zion with the following request.   For the past 6 years, a free program with 16 volunteers called Compassion & Care Team within the York County Coroner's Office has reached out to families who have lost loved ones. They provide comforting letters, grief support, support group information as needed. Now they wish to offer Healing Shawls to mothers, grandmothers, care givers who have lost a child.  If you have free time to knit/crochet for this worthy cause, please call Lucy (717-873-4971). She will provide the yarn and pattern.  Interested? Please contact Lucy directly.  (This is unrelated to the Prayer Shawl Ministry at Zion.)

SOCIAL TIME EVERY WEEK
Join us for Social Time in the Social Hall at the close of each Sunday service for snacks, beverages and to catch up with one another.

COVID-19 GUIDELINES FOR WORSHIP HAVE CHANGED
Effective as of Council meeting on 3/7/22 :

Communion will continue on the 1st and 3rd Sundays of the month, using the individual chalices while staying in the pew.
Hymns will no longer be printed in the bulletins; hymnals will be used
Sharing the Peace will continue to be done while staying in the pew
In-person Sunday (9AM) service will also be live-streamed on Facebook and recorded each week and posted to YouTube as soon as possible thereafter.

CHURCH OFFERING
Please continue to support Zion’s mission.  Your financial contribution can be made by:

CHURCH OFFICE HOURS
The office is now open to in person visits. It is best to contact Brenda before stopping in the office because she is still splitting her time working at home and in the office. Brenda can be reached at 717-235-3276 in the office, or on her cell phone at 717-793-7236.